Turning personal loss into a fundraising challenge to help others has helped a local man to cope with the sudden death of his mother.

Gennaro Barbato, (27), one of our health and fitness instructors, set out to raise funds for MND Scotland following  the loss of his mother Cheryl Barbato (54) of Kirkcaldy, following her own struggle with motor neurone disease.

A busy and active person, Cheryl was married to Franco Barbato and had two children, Genaro and Daniella. Cheryl loved spending time with her family and was a doting grandmother to Daniella’s children, Amelia and Alexander.

Cheryl was diagnosed with MND in August 2018 and died soon after in December 2018, Genaro was determined her loss would not be in vain and that others could benefit from research and support offered by MND Scotland.

He said: “My mother had benefited from MND Scotland following her diagnosis, and we as a family, have had tremendous support from the organisation.

“I decided to take on a fundraising challenge by signing up for a London to Paris cycle this July and was hoping to raise £1,600. But, within 24 hours I had achieved my target thanks to so many generous supporters. With months to go before the cycle challenge, I decided to increase my target to £10,000 and organised a fundraising night in the Gunners Club in Kirkcaldy and raised over £5,000. 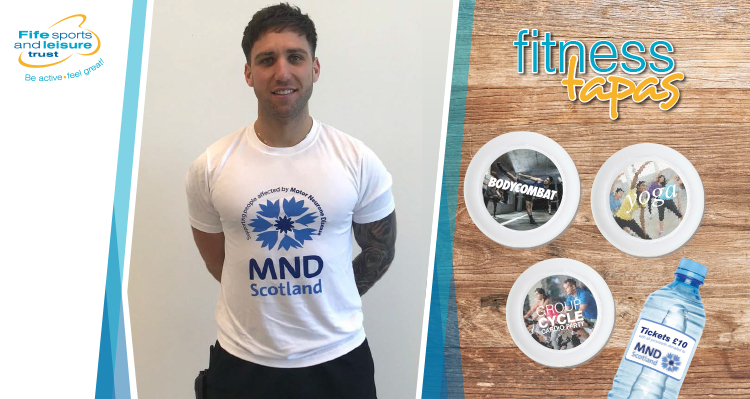 “So far I have raised over £9,000 and am confident I can reach my target so that others affected by this devastating disease can get the support they need. I’d like to say a big thank you to everyone who has helped me – I know my mum would have been so grateful for everyone’s generosity.”

In support, we will be holding a fundraising taster fitness class event at Michael Woods Leisure Centre, Glenrothes on 25th May from 1pm with all proceeds going to Gennaro’s total for MND Scotland. Click link for details Fitness Tapas - Michael Woods Sports & Leisure Centre

Iain McWhirter, Head of Fundraising at MND Scotland, said: “I’d like to thank Genaro for taking on this challenge in aid of MND Scotland. £9,000 is an incredible amount to have raised, and will go towards helping us provide support to people affected by MND across Scotland, and fund vital research into a cure. We wouldn’t be able to do any of this if it wasn’t for people like Genaro raising awareness and funds.”